Finding a good way to drop exposition and world lore is challenging. However, recently I started tinkering with the standard copper, silver, gold, platinum coinage and stumbled on a goldmine of possibility. There is SO much you can describe about a region based on its money!

Not every kingdom is going to be making currencies out of precious metals. Some regions may only have a few available metals  while some regions may not have the technology for metalworking at all but they have precious stones. The material of the currency should reflect the availability and capabilities of the nearby region.

In my own game, the Drakes lack precious metals but have what they need to make iron and also have plenty of jade. To reflect that I had a Shield (silver piece) made of iron, that is pre-segmented to be broken up into Tenths (copper piece) as needed. They also have a Jade (gold piece) which is a rectangular iron token with a specific weight of jade stone in it.

In contrast, my great city state of Ayotl does have precious metals in abundance, and have many talented artists as well. So, in  addition to gold and silver pieces I added colored ceramic pieces as well to show off the regions wealth and craftsmanship.

Coinage isn’t the only way to shape your money. Since money is just an object with an agreed upon value you can literally make anything the standard of money of your world as long as it can easily be carried. Beads, rings, chits, dice, pawns, figures, notes, sticks, and keys could all be the standard currency. It should reflect the region in some way though.

Ayotl uses beads as currency because the god of the city is a beholder. Each bead is etched to look like an eye. It also gives an alien vibe to this rather advanced city.

In the bandit city of Barrow your wealth is your status. They have made their currency wearable rings that are meant to be worn in gaudy displays of wealth.

Finally the most obvious way to add a bit of lore to your currency is by describing what is printed or etched on it. It could have a face of the kingdom’s ruler on it. It could show a beast that the region is known for or was famously slain. It could show a powerful artifact that was used in the founding of the empire. It could also be a different image for each level of currency, allowing you to tell many different stories through the bits of coinage that the heroes are looting.

Each of the Ayotl beads is shaped like an eye, but every bead is also engraved with an elvish rune that symbolizes each of the eye rays of the beholder. Citizens of Ayotl wear their favorite rune as a symbol of luck.

Governess Nala, who rules the Drakes, shot down a beholder with a cannon. So a beholder is etched into the Shield. When you break it up into Tenths you are removing 1 of the 10 eyestalks of the printed beholder.

I hope you found this article interesting 🙂 If you’ve used interesting currencies in your game I’d love to hear about it! Please tell me about it in the comments. 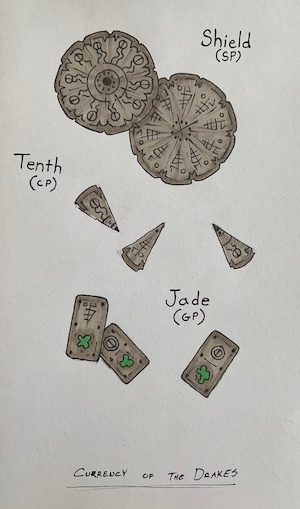